Designing Lighting Magazine Features OVI in April of 2021 edition for the work they have done with the Canadian Parliament.

Enrique Peiniger, founder and chief innovator of the Office for Visual Interaction (OVI), recently granted me an interview to hear a behind-the-scenes account of his team’s design for the Canadian Parliament. Located in the heart of Ottawa, Canada, inside of the West Block complex on Parliament Hill, the culmination of OVI’s 10-year design project is stunning.

The huge, glass-roofed Debating Chamber and series of Committee Rooms feature advanced lighting technology required for HDTV broadcasting, yet avoid the use of a typical studio gantry system. The broadcast lighting requirements are coordinated with daylight elements to ensure that natural light levels in the Chamber are regulated and balanced with architectural elements. The lighting design seamlessly intensifies the building’s blend of modern and historic styles, whether in the vast, High-Gothic-style open-air courtyard or in the above-ground and subterranean Committee Rooms, allowing federal government functions and television broadcasts to be carried out with similar style and ease.

The over-decade-long project began with a complete transformation, rather than a retrofit. In the Chamber, an immense glass roof, supported by structural “branches,” was installed to connect and
enclose the space. OVI reverse-engineered their design; rather than install lighting into completed architecture, to meet lighting design requirements the columns themselves were first strategically placed based on, and their position and angles determined by OVI input. 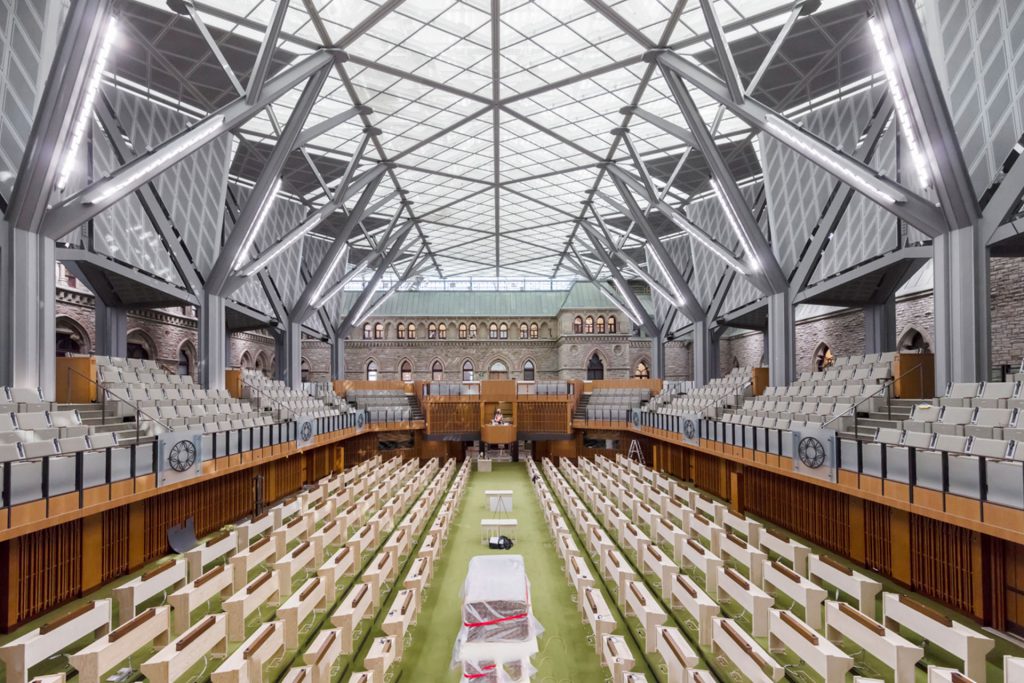 “Lighting Up The Canadian Parliament”

By Randy Reid with contributions from Abby Bush

Read the full PDF of the article: https://www.oviinc.com/wp-content/uploads/2021/05/Designing-Lighting-April-2021.pdf