Architonic features OVI’s work from the 2006 project at the United States Air Force Memorial in Arlington, VA.  The work was the result of the partnership between OVI and architect, Pei Cobb Freed & Partners.

Soaring toward the stratosphere, the stainless steel spires of the United States Air Force Memorial evoke the precision and weightlessness of flight. Reinforcing this architectural agility, illumination designed by Jean Sundin and Enrique Peiniger of Office for Visual Interaction (OVI) appears to emanate from within the monument itself, caressing the slender forms and bursting into the night sky.

Lighting the memorial was a highly technical challenge. Each spire has a different height – 82 m, 70 m, and 60 m – presents a small surface area, and sways up to 46 cm in the wind. Moreover, the convex contours of the arcs would turn away from central lights, necessitating a peripheral lighting strategy. An additional challenge was posed by the monument’s location on the commercial flight path to Washington Reagan National Airport. To meet Federal Aviation Association (FAA) requirements, red beacons would typically need to be placed at the mid-point and tip of each spire, alerting approaching pilots. Upon a close reading of the code, Sundin and Peiniger determined that as an alternative to the red beacons, the spires could be treated like church steeples and their upper portions brightly lit to meet aviation requirements. Using the FAA figure as a baseline, illumination levels are calibrated in a gradient to articulate the monument’s dramatic forms. Illuminated with a variation in intensity, the sweeping curves of the arcs are accentuated, and their tips brilliantly lit. 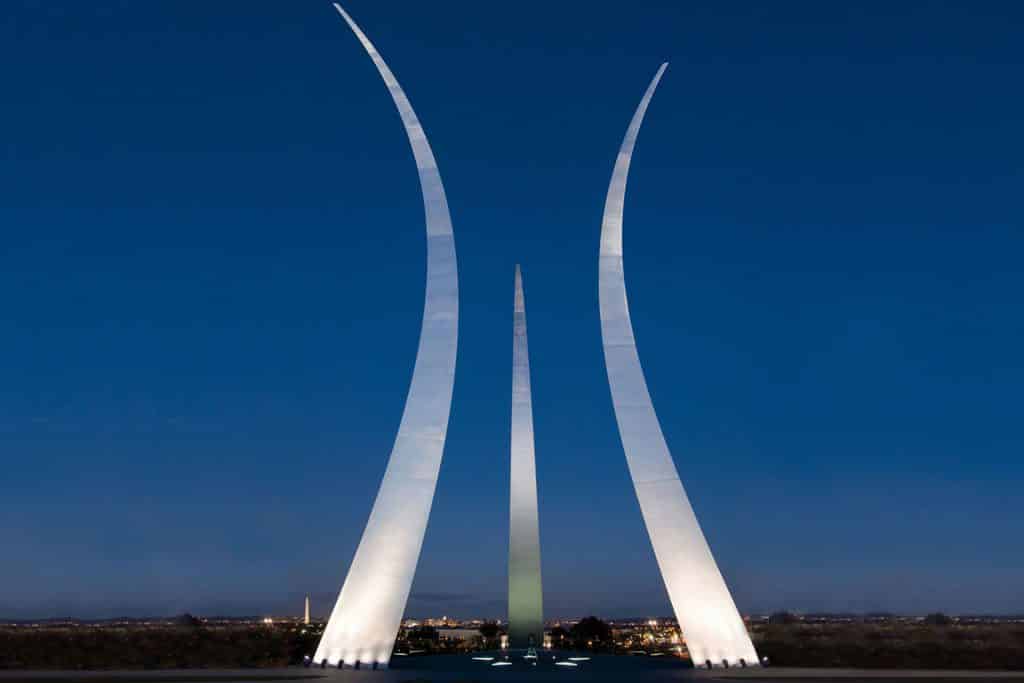 Read the full article at: https://www.architonic.com/en/project/ovi-office-for-visual-interaction-united-states-air-force-memorial/5101016